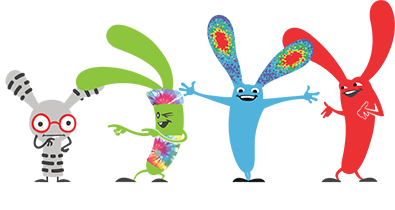 I am sure that you have already heard a lot about antibodies throughout all our blogs and by now you most probably have an idea of what they are, how they work and why they are such a key element of our immunoassays. But have you also wondered about the fact where these antibodies actually come from? I would like to take the opportunity with this blog and introduce you to the basic principles of the production of antibodies. I hope that you will find it useful.

Before we get into the specifics of their production, let me just give you a quick reminder about them. Antibodies, also known as immunoglobulins, are proteins produced by the immune system (by B cells) to neutralize antigens such as bacteria and viruses. Antibodies are Y-shaped molecules consisting of a constant region (common to all antibodies produced by a particular species) and a variable region that is unique and specific to a particular epitope on an antigen, allowing for a highly specific binding of these two structures. The antigens are usually other proteins, but can also be peptides, carbohydrates, small molecules or even nucleotides. Peptides and non-protein antigens due to their smaller size usually need to be conjugated to a carrier protein to become “good” immunogens, which means that they will be able to induce the desired immune response which will result in the production of specific antibodies.

We can differentiate between monoclonal and polyclonal antibodies, depending on the method that they are created from the B cells. Both of them have an important role in the immune system, but also in diagnostic exams and treatments.

Polyclonal antibodies (pAbs) are a mixture of heterogeneous antibodies produced by different B cell clones in the body. Due to their heterogeneity they can recognize and bind to many different epitopes of the antigen. They are produced by the immunization of an animal with the antigen. This immunization is repeated several times (at the interval of several weeks) so that the B cells are able to produce a large amount of antibodies against the particular antigen.  After the immunization process the blood will contain a variety of antibodies, each of them specific to a different epitope of the antigen. The antibodies can be obtained directly from the serum (the fluid and solute component of blood after the clotting process has occurred), which contains high levels of the developed specific antibodies, or these antibodies can be isolated from the serum by affinity purification (to separate it from other serum components).

As opposed to the polyclonal ones, monoclonal antibodies (mAbs) are generated by identical B cells, which are clones from a single parent cell. This explains their monovalent affinity which means that all of these antibodies recognize the same epitope of an antigen. The production of these antibodies also starts with the immunization of an animal (usually a mouse) with the desired antigen, but finishes ex-vivo, using tissue-culture techniques. Once the immune response has occurred after the immunization, the B cells are isolated from the animal’s spleen and are fused with immortal tumor cells (myelomas). As a result of the hybridization process so called immortalized B cell-myeloma hybridomas are created, which combine the beneficial properties of the two cell lines with their properties of being able to produce the specific antibodies towards the target antigen while also being immortal. The next step is the screening of these hybridomas for antibody production and performance. The hybridomas that are able to grow continuously while producing antibodies are then screened for the antibody of interest. The antibody secreted by the cells into the culture media can be harvested and used in its crude form, or it can be purified by affinity chromatography.

So after giving you a brief explanation about the production of these antibodies, you might ask the question: which ones are “better”? The answer isn’t so simple, because both polyclonal and monoclonal antibodies have different advantages and disadvantages which make them suitable for different applications.

In the case of the polyclonal antibodies their main advantages and disadvantages result from their multi-epitope specificity. Their key advantages are their short production time and low cost, their stability (they are less sensitive to pH or buffer changes), their high affinity (since they are binding to more than one epitope of the antigen they help amplify the signal) and their tolerance to minor changes (slight denaturation, polymorphism, heterogeneity of glycosylation) of the antigen. Their main disadvantages are that they are more prone to batch to batch variability and cross-reactivity.

In the case of the monoclonal antibodies their advantages and disadvantages are mainly based on their high specificity to the same epitope of an antigen. Their key advantages are: highly specific recognition of only one epitope of the antigen, ability to produce unlimited quantities of antibodies due to the immortal hybridoma cell lines, high consistency between experiments, minimal background noise and cross-reactivity. The main disadvantages of monoclonal antibodies are that their development takes more time and requires highly trained personal, also that they might be too specific to detect across a range of species and that they are vulnerable to any change of the epitope (even a small change in conformation can lead to reduced binding capacity).

For applications such as diagnostic manufacturing and therapeutic drug development that require large volumes of identical antibody specific to a single epitope, monoclonal antibodies can be an ideal solution. For general research applications, however, the advantages of polyclonal antibodies typically outweigh the ones of the monoclonals, especially since an affinity purification of the serum can further enhance their properties.

I hope that this information has helped you understand more about the different types of antibodies and their production.